One Canadian province decides to prohibit the sale of edibles, due to the estimated increased risk, posed by cannabis edibles in children.

A new regulation, to ban the sale of any marijuana product, “attractive to minors” was proposed by the Quebec government recently. The regulations also included the ban of additives, flavouring or colouring, that would alter the taste or smell of the cannabis product.

In December of 2018, the Canadian government legalized the sale of recreational marijuana; however, edibles and other cannabis products were not included in the legislation.

Marking the first anniversary of the legislation, the Trudeau government plans to permit the sale of cannabis edibles and the use of topicals, by the end of December 2019.

What’s the catch? Well, for starters, the provinces are regulating their own version of the federal laws and Quebec has decided to; yet again, have a distinctly unique way of reading and interpreting, the new federal statutes.

“We believe that the first thing we need to do is to protect our children. We are talking about young children; who, since the legalization of marijuana sales, have increased the number of intoxications, both at the Children’s Aid and at St-Justine. So we are really worried about the kids. The first thing we need to take care is our public health, before economical issues.”

To hammer his point home, Carmant parroted his smooth, practiced, and panic-inducing, Colorado statistics; which demonstrated that 10 percent of all cannabis intoxications came from the use of edibles, while; alarmingly, the sales of edibles represented only a fraction of the total marijuana sales, with 0.3 percent of the market share.

Instead of the traditional fear-mongering or subversive deep, nose-dive into reefer madness, perhaps the Quebec government should have taken a leadership position in a newly budding, billion-dollar industry.

Promoting the safety of the population, young and old alike, by educating said population about the safest consumption practices, safe handling techniques and the secure and proper storage of cannabis edibles would have put Quebec and its people a mile ahead; facing the future, instead of messed up in the shady past of cannabis prohibition. 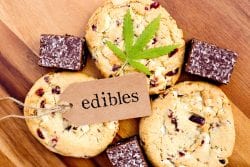 Moreover, tackling these alarming statistics is crucial and the statistics don’t lie. The population, at least in Colorado, were not accustomed to the effects of marijuana edibles or to the safe handling of said products (especially around children).

Embracing archaic, repressive and prohibitive laws is unfortunately not a first-time occurrence in Quebec, quite the opposite. Traditionally, Quebec resists change, clinging to the past, refusing to learn from past failures.

so why then does Quebec think that they can stem the tide of delicious cannabis edibles flowing to their borders when all it will take to upset their fragile system, consisting of hair-pulling and screaming, “Oh, the  system is even when that histo

The CAQ position isn’t all that surprising, considering that the Legault government plans to raise the legal age for cannabis consumption to 21 years old in Quebec and has already attempted to ban consumption, in all public spaces (this was later dropped).

Luckily, the CAQ government will permit some products, such as edible oils and concentrated butters, that do not have appeal to children. In a circular spiral of nonsensical, ironic comedy; these cannabis concentrates can then be used in the production of home-baked goods.

To further confuse the average Canadian citizen of Quebec, is the matter of marijuana topical creams and salves. Carmant believes that topical creams and mixtures should not be sold at the recreational, SQDC marijuana store because topical mixtures are medicinal and therefore, should be prescribed only by a doctor.

Quebec’s junior health minister must think Canadian doctors are slackers. An already, over-burdened and strained system, with wait times to see a specialist, or worse, to even get in, to see a GP, forget the specialist!

The icing on the cake is that after all of these wasted hours, between you, your work, the doctor’s time and your added aggravation; is that all of that ineffective and wasteful time management and tax-paying is ultimately going towards a topical cream, that is as safe and more effective than over-the-counter Icy/Hot.

I have an idea! Let’s not over-burden our over-worked, under-paid Canadian doctors with regulatory, white-noise garbage of requiring prescriptions for non-prescription products.

Let’s instead have an effective, educated and rational conversation about marijuana edibles. Let’s enable our population with the facts, instead of the reefer madness propaganda and the fear-mongering displayed by a surprisingly small, but loud group of people, in top positions of government.

Let’s embrace the future and guide other countries, that follow us into legalization. The other choice is the stifling, restrictive Quebec provincial government model, attempting to constrict the legal, cannabis edibles industry before it has the chance to grow and blossom.

There is hope for Quebecois living in the oppressive, mostly edible(less) regime, that is Quebec: as long as you have some ganja, a brownie powder mix and an Easy-Bake Oven, you’ll be baking or baked, in no time. Wait for it…..