Cheeba’s is a British Columbia based MOM dispensary located in Vancouver; they are one of the top players in the Canadian MOM scene and they have a product line to support it. We applaud them on having a detailed about us page that described their priorities as a company and why they were created. They are a consumer-focused company that always want to put their customers first; and according to them, they even prefer to over-weigh their packages slightly, to ensure that their customers always feel satisfied and never ‘ripped off’.

Cheeba’s have taken this customer-first commitment because; they say, most of their own staff are pot-lovers too and they want to make the process of purchasing weed as stress-free and enjoyable as possible. They also have a commitment that they test every cannabis product that they sell and if the staff doesn’t like them; they don’t sell them, Period.

Their package came in a nicely sealed box that would be indiscernible from regular mail; it was was simple, effective and professionally packaged, and you could definitely tell that Cheeba’s took their customer’s discretion seriously. 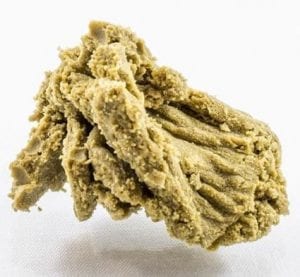 As we opened the container we were immediately hit with the sweet and pungent aroma of Animal Cookies budder. There was a sweet and subtle sour aroma that waifed from the container into our senses pleasantly.

When vaped with the Atmos Jr., this indica dominant hybrid strain produced rich and full clouds of vapour that were highly satisfying to inhale. This budder produced very little irritation to our throat and we would highly recommend Animal Cookie Budder for anyone that was in need of an extremely smooth concentrate.

The high from Animal Cookies Budder hit us quickly with a potently uplifted, relaxed and calming high; that melted away stress and anxiety. This strain; by Cheeba’s, produced a pleasant, creative euphoria that would be conducive to productivity. On the other hand, long sessions with this budder produced a deep, full body high that had us couch-locked, with just enough motivation for Netflix. This potent and delightful budder comes highly recommended by DispensaryGTA as a smooth and strong nighttime medicine. 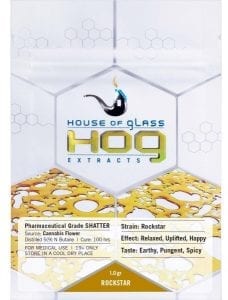 This premium Rockstar shatter created by House of Glass will not leave you disappointed; from the moment that we opened the package, the powerful aroma smashed our senses. There was a lot of care and attention to detail, in regards to how this shatter was made.

A beautiful, translucent and golden-ochre colouration was observed; as well as, a spicy, sweet, and earthy fragrance that had a hint of grape. This honey, golden-ochre and perfectly pressed piece of beautiful shatter was truly a sight to behold and is incredibly affordable at only $39/g.

When vaped with the Atmos Jr., Cheeba’s Rockstar Shatter produced dense and rich clouds of vapour that immediately provided a sense of relaxation and euphoria. The spicy flavour and the hint of grape remained as an aftertaste as we continued to dab this incredible shatter. Rockstar is known for is heavy indica effects and those were present in spades here as well; producing a heavy couch-lock and full body sedation after only a couple dabs of this shatter. This shatter can also be used to treat appetite loss, glaucoma, nausea, nerve pain and inflammation.

The Purple Urkel Shatter by House of Glass had a glassy appearance; much like its namesake, having a golden-amber colouration that glistened in the light. It was easy to break apart into smaller dabs and put into our Atmos Jr. 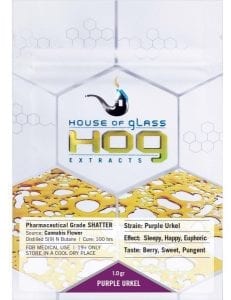 When vaped, the vapour produced was satisfying, dense and rich clouds of thick vapour that dissipated quickly. The aroma was heavily earthy, with a subtle note of berries.

Purple Urkel Shatter was a perfect nighttime strain with its strong indica dominant heritage. Widely regarded for its sleep-inducing effects and heavy euphoria this strain is perfect for those that suffer from insomnia or chronic pain.

Rockstar hit us with a powerful aroma that attacked our sinuses. It produced a fragrance that was spicy, herbal and extremely pungent. The bud itself was an olive green colour and had huge amounts of bright, fiery-golden pistils bursting forth from the bud. There was also a large number of crystal trichomes; generously dusted, throughout the bud. 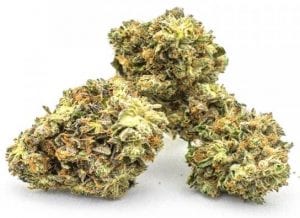 When combusted, Cheeba’s Rockstar produced dense, thick and rich billowing clouds of smoke. This flower produced a little bit of a burn at the back of the throat; however, it did not produce a cough. There was a pleasant herbal aroma that lingered for a long time after we consumed the hit.

When vaped with the Arizer V-Tower, the herbal and earthy flavours of Rockstar were immediately apparent and it provided a pleasant flavour that made it far too easy to over-indulge.

The high from this indica dominant hybrid was calming and provided a sense of full body relaxation that washed over us like a wave. The high had both mental and a deep, full body effect, with the cerebral effects taking hold a bit later on in our vaping session. Rockstar provided a deep, meaningful, introspective and cerebral mindfulness that will be sure to melt away pain, aches and any tension from a stressful day. Rockstar remains one of our favourite strains and we highly recommend this well cured and quality strain from Cheeba’s.

Lemon Sour Diesel from Cheeeba’s was an incredibly powerful sativa dominant hybrid. As we opened the package, we were stunned by its pungent aroma that overwhelmed our senses.

Lemon Sour Diesel was true to its namesake; delivering a refreshing and zesty lemon aroma, with the powerfully pungent diesel fragrance as the undercurrent of the flavour profile. The nuggets themselves were medium sized; with an olive, sage and laurel green complexions and deep fiery-orange pistils springing forth throughout the flower. 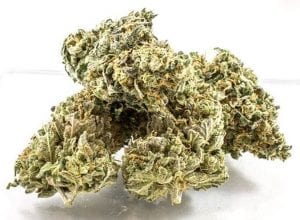 When combusted, Lemon Sour Diesel produced heavy, thick and rich smoke that tickled my throat on inhale; producing a slight cough. There was also an arid, drying sensation to the flavour, so have water on hand for this powerful daytime medication. There was a subtle hint of lemon on combustion and the heavy smoke produced an earthy lemon fragrance in the air that lingered pleasantly after.

When vaped with the Arizer V-Tower, the intense flavour of lemon was immediately apparent. There was a slight hint of an earthy sourness; however, the lemon flavour was the star of the show. We highly recommend Lemon Sour Diesel as a daytime pleasantry for vaping connoisseurs.

This strain is a hybrid that provides a heavy hitting and non sedating high. Novice or inexperienced users should use caution with this potent strain of flower, as the effects can feel overwhelming to the uninitiated. That being said, for those who do have experience, the high is extremely enjoyable and provided the mood-boosting effects; without the anxiety or paranoia that some sativas are notorious for. If you’re looking for a good sativa dominant hybrid that packs a powerful punch, then look no further than Lemon Sour Diesel from Cheeba’s.

Monster OG was a powerful indica dominant hybrid that crossed the heavy OG indica with OG Kush and SFV OG hybrid. With THC numbers that can go past 26%, this strain will pack a powerful punch that is not recommended for novice users. 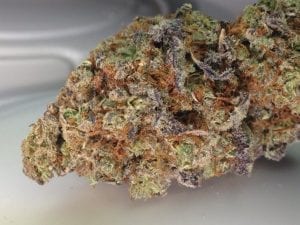 Upon opening the package, we were hit with a deep, spicy characteristic, coupled with an earthy, subtly pungent, diesel aroma. The buds appeared to be packed with resin and looked absolutely delicious.

When combusted, Monster OG produced a light, but voluminous cloud of refreshing, airy smoke. This strain was extremely easy to smoke and provided no irritation to my throat. I thoroughly sampled Monster OG and can attest to the rich smoke providing hours of smooth, relaxing enjoyment.

When vaped with the Arizer V-Tower, we discovered a pleasant citrus and earthy flavour that had immediate and powerful effects. Monster OG produced dense and voluminous clouds of rich vapour. The sweet and spicy vapour produced a slightly arid sensation in my mouth, be sure to have plenty of water on hand!

This rare strain from Cheeba’s was packed with a powerful punch of THC; making Monster OG the perfect nighttime strain. Whether you’re looking for something that will simply knock your socks off, or are in need of something for your pain; Cheeba’s Monster OG will not disappoint.

We felt the high produced a deeply introspective and heavy, full body stoned feeling. As this strain is not recommended for daytime use; we felt Monster OG would be the perfect accompaniment after you have completed everything requiring focus; after a long, hard day.

Immediately apparent; was the unique fragrance complexities that Locomotion provided. This indica dominant hybrid had a heavily sweet and pungent fragrance; as well as, an undercurrent of a musky aroma, with a hint of sweet citrus. These small and medium-sized nuggets were packed with glittering white crystal trichomes and a sticky feeling resin; however, don’t be fooled by their smaller size, these buds packed a hefty punch. 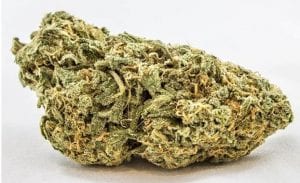 When combusted, Locomotion produced extremely rich clouds of smoke that required extra effort to hold into our lungs on inhale; but, as we exhaled, the powerful indica effects commenced. The first thing we noticed was that the rich, musky fragrance bursting into the air. The aforementioned musky aroma continued into a sweet musky, earthiness that was truly unique.

When vaped with the Arizer V-Tower,  the citrus notes of Locomotion were apparent. The vapour produced was thick and rich and was like a warm hug for our lungs. This vapour was extremely satisfying to inhale; due in part to, Cheeba’s impeccable inspection process and it’s well trimmed and well-cured flowers.

Locomotion was an indica leaning hybrid. This strain provided a powerful high that produced a strong cerebral and introspective mood, that we thought was best consumed when relaxing is the main objective. We felt a spacey; almost ‘head-in-the-clouds’ feeling, as we drifted calmly through introspective thoughts and a mellow and calming cerebral mindfulness.

Cheeba’s is a dedicated Canadian MOM dispensary that puts their customers and their product first. Every product sampled from Cheeba’s was extremely potent, well cured and top notch. Indeed, Cheeba’s could teach a few other MOM dispensaries about how to prioritize their customers’ needs. We found Cheeba’s selection superb and their prices are unmatched for certain strains and quite reasonable for the others.

We highly recommend Cheeba’s to our DispensaryGTA readers, and once you check them out, let us know in the comments below!

Review of Chronic by Mail