BudifulBC is a MOM dispensary with 20+ years experience in the cannabis industry. Their website is minimalistic and easy to navigate. Emails were answered promptly by knowledgeable staff and this MOM even has a 24/7 emergency hotline for their patients.

BudifulBC promptly shipped the order and it was packed discreetly, professionally and would fit in most standard mailboxes. The order and weights were measured and accurate. Another positive that must be mentioned is that shipping was free on orders over $99. This is an incredibly low minimum order for free shipping when comparing MOM dispensaries.

When I opened the ziplock, the pungent smell of diesel gasoline punched my senses. Behind the pungent diesel fragrance; there was a soft, sweet orange aroma.  The large, dense and well-cured buds were lightly coated in a dusting of fine crystal trichomes. Sour Tangie is an 80% sativa dominant hybrid combining two of the most popular sativa strains: Sour Diesel and Tangie. Upon combusting, the smoke was rich and bold. A heavy aroma and flavour of citrus exploded in my mouth, which made smoking far more enjoyable; much to the chagrin of my partner. The smoke was smooth, with a surprisingly complex flavour profile given my first and immediate reaction when the pungent diesel smell slapped me in my sinuses. For the smoke connoisseurs out there, this strain is a must try. 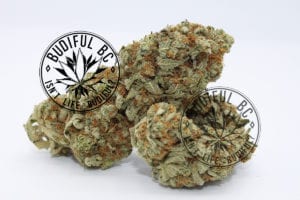 When vaping with the Arizer V-Tower, the vapour of Sour Tangie was full-bodied, aromatic (citrus, not diesel!), silky smooth and had an earthy, sour aftertaste. This strain is perfect for daytime use and can promote creativity, relaxation, euphoria and can even alleviate anxiety, unlike many other sativas that can actually cause anxiety and paranoia.

The high of Sour Tangie was incredibly pleasant, allowing me to stay ‘daytime’ functional; while still elevating my mood and creative flow. The price for Sour Tangie was reasonable at $120 per half an ounce when comparing it to other MOM’s high quality, potent sativa strains.

We next tested Alien OG, a powerful, indica dominant hybrid rumoured to be one of the most potent strains available today at 28% THC. When opening the bag to Alien OG, the pungent aroma of fresh lemon waifed through the air reminiscent of Pledge. The medium-sized, densely packed and well-cured nugs were lightly dusted with microscopic crystal trichomes.

When combusted, this flower produced heavy, rich and aromatic smoke; however, it also induced a fit of coughing; so have a

drink handy. The flavour of the smoke could be described as a spicy earthiness, and this aftertaste persisted long after smoking had ceased.

When vaping, Alien OG had a bold, complex flavour profile with a rich and fragrant aroma. The vapour was dense and full; producing clouds that appeared visually similar to smoke in opacity. The flavour can be described as spicey leather with a hint of lemon (It tastes much better than described, I promise!).

This hybrid packs a heavy cerebral high that is so enjoyable, it can be consumed both during the day and at night. It helped us focus on what needed to get done, all while feeling relaxed, happy and euphoric.

Next up for review was Super Kush. Its small and medium-sized, densely packed, well cured, trichome covered, olive coloured and orange-flecked nugs had a subdued earthy odour that wasn’t overpowering. 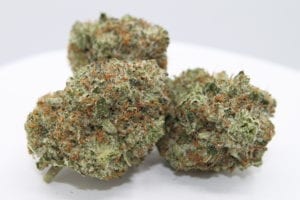 When combusted, Super Kush’s earthy flavour predominantly permeated our senses followed by a cool, spicy aftertaste; we found the flavour and aroma quite pleasant. The smoke from this strain had a delicious flavour profile and it was smooth, with no burn; even on a deep inhale.

When vaped, Super Kush’s vapour had a spicy, sharp mint taste with subtle earthy tones. The vapour was potent, light, airy and the spicy mint flavour persisted long after the bowl was consumed.

The high of Super Kush was pleasant and euphoric; we were able to relax, uplift our mood and feel calm. We were also able to remain incredibly focused because this indica dominant hybrid is not as sedating as other indica strains. We can recommend this strain for new and old users alike, as the mellow, cerebral high is very calming and predictable.

The last bud we reviewed was the pure indica strain, Violator Kush. An earthy, sweet and spicy scent erupted as soon as the bag was opened. When the bud was ground, the aroma transformed and the subtle fragrance of freshly chopped wood was added to the spicy, sweet scent.

The medium-sized nugs were well cured and the bud was excellent for grinding up; the consistency of the ground flower was superb when using the Arizer V-Tower. 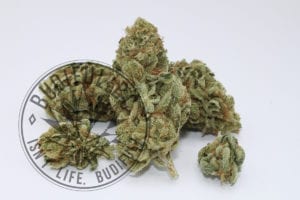 When combusted, Violator Kush retained its spicy, earthy flavour. The smoke was bold, flavourful and smooth going down. A spicy aftertaste remained a pleasant reminder of Violator Kush’s bold taste.

When vaporized, a woody, pine aroma blasted through my sinuses; quite unexpectedly. Once I acclimatized to the flavour of the vapour; I found the fragrance and flavour quite pleasant, if only in small doses. The vapour’s opacity was rich, dense and the vapour’s aroma in the air retained it’s spicy and sweet aroma profile; despite the fact that my sinuses disagreed.

Violator Kush gave a powerful sedating high that kept us relaxed, tranquil and produced deep body effects that had us couch locked, stress and pain-free. This strain is recommended for nighttime use; once this strain is consumed, there will be very little you will want to do (unless it involves getting up to go to the refrigerator!).

Budder remains one of the most popular forms of cannabis concentrates due to its versatility and consistency. We reviewed BudifulBC’s Blue Dream Budder to assess its performance. 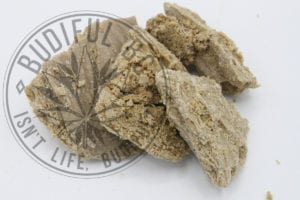 The budder arrived in a small glass container with a screw-on lid; which remains our preference when receiving budder or crumble concentrates as we can minimize spillage and loss.

When opened, the sharp and pungent aroma of Blue Dream caught my attention; I felt quite invigorated after just a small sampling of the pungent, sweet scent!

The budder was a beautiful, light beige colour with an overall creamy texture. Its consistency and ease of use make Blue Dream Budder the perfect concentrate for novices and its rich terpene flavour profile would satisfy even the most die-hard of connoisseurs.

The vapour produced from the Atmos Jr. was abundant, rich and the vapour had an incredibly bold and sweet flavour with a floral(berry) undertone.

Blue Dream’s high was relaxed, calming, hypnotic at times and incredibly euphoric. The strain helped me stay on task and focus; in addition to giving me the motivation and pain relief to complete my busy day. This strain is a powerful sativa dominant hybrid which makes Blue Dream Budder the perfect daytime concentrate for both medicinal and recreational users.

Quality product, a 24/7 emergency hotline and free shipping with a low qualifying order make BudifulBC stand out among an endless sea of MOM dispensaries. This MOM has excellent customer service and goes the extra mile to care for their patients. BudifulBC’s 20+ years in the industry will help deliver you high-quality product at reasonable prices.

Check out BudifulBC for yourself and let us know what you think of them in the comments below.