Why does weed make your eyes red? Weed-Deals has the answer. 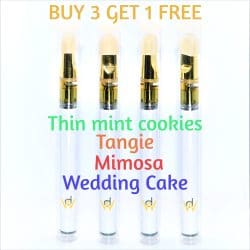 The list of cannabis strains, cannabis products, and cannabis accessories on the Weed-Deals web platform is virtually endless, which is why we were particularly excited to try out their disposable vape pens. Becoming more popular by the day, vaporizers are often found to be safer, more convenient, and easier to grab in a pinch compared to rolling one to go or taking a bowl with you.

The best part about Weed-Deals is in their name – they have the best deals on weed! We took advantage of their mix and match deal to get three different disposable vape pens at a discount, plus another disposable vape pen for free. We ended up getting to try one of each of the mix and match strain choices: Mimosa, Thin Mint Cookies, Wedding Cake, and Tangie. Each of their disposable pens contained only 0.5 grams of product; a convenient, sleek, and portable way to consume a product on the go.

How long does weed stay in your system? Click for the answer from Weed-Deals. 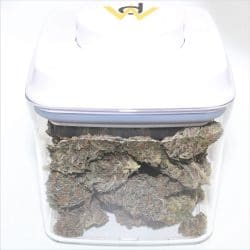 The signature Weed-Deals Budbox is something we did not know we were missing in our lives. A food-grade plastic storage container, the Budbox has an airtight easy-to-use push button that helps keep the cannabis fresher longer. Not only does it help preserve the herb you’re storing, but it can increase the longevity of other cannabis products if they’re stored in the container, too.

Altogether, the Budbox has a 500ML capacity, so it can generally fit about an ounce of marijuana if it’s packed firmly in the container. The patented button at the top just takes a push before pulling the lid up to open, or vice versa to close it. Overall, this would be ideal for those who prefer to purchase their herb in bulk; the easy-to-use, airtight container gives your bud a safe place to stay so it can stay fresh and dank even longer.

Weed-Deals offers two different types of grinders, though we strayed away from the plastic weed grinder this time around. Instead, we went for the premium weed grinder, a metal grinder that provided just what we needed. It has a stout weight that’s not too heavy; about 108 grams of solid metal and grinding power. The top, at least, is magnetic, which helps keep the lid from going flying if the grinders ever dropped. The indented diamonds on each half of the metal grinder provide ample turning power; though they may be a little too sharp for their own good, so watch your fingers!

It’s one of the shortest grinders we have ever used, though that may be partially because there’s not an actual kief catcher or kief section. Instead, kief builds up in the metal grinder along the outer-inside curves. It is also one of the widest grinders, though, which means there is a lot of space between each diamond blade. Too much space means it’s easy to overfill the grinder, so keep a close eye out for that. Overall, it’s an excellent-quality weed grinder with a nice logo on the top that we’ll be sure to use for years to come.

From the online dispensary themselves, Weed-Deals even has their own line of rolling papers. Their high-quality, 1 ¼ premium rolling papers come in a pack of 33 with filter tips included. Altogether, the features make this pack one of the coolest rolling papers we’ve gotten to use. They were easy to roll, feeling almost transparent in our hands without having to do a lot of crinkling or folding.

There wasn’t a taste upon trying the papers, and they close with a magnet, which is possibly the most impressive thing we could’ve asked for. These papers allowed for us to roll a joint that burned slowly, didn’t canoe or run, and tasted good the whole way through. We would liken the experience to that of Zigzags, though these rolling papers seem still just a tad better.

We got to try the Thin Mint Cookies strain for this cartridge. Though we got to try the same strain for the disposable vape pen, it was the most memorable strain for us, so we were excited to try it again in this cart. We were so impressed with the taste, we forgot it wasn’t just a regular vaporizer – we were expecting something earthy, or at least to taste the cannabis slightly, but we just got a cool cookie mint flavor instead. Pleasantly refreshing, we are excited to come back in the future for more THC distillate cartridges from Weed-Deals

Have you ever tried the online dispensary known as Weed-Deals? While it’s one of our top recommended dispensaries for quality cannabis and cannabis products across Canada, there are still plenty in our community that haven’t gotten the opportunity to try them out. They are never running out of deals, and their inventory is constantly being replenished – what’s stopping you from trying Weed-Deals today?

Check out these 5 best weeds for anxiety from Weed-Deals

What has been your favorite cannabis strain or other product from Weed-Deals? Was it an item that was part of their house brand, or just someone they partnered with? Let us know in the comments, and don’t forget to check out Weed-Deals directly to see what the best sales and discounts are for today