How to Talk to Your Parents About Cannabis Use

You might think that it’s difficult for young teenagers to talk to their parents about cannabis use these days; but try talking to your parents, who might be 60, 70, 80 or even 90 years old. The older generation has a special appreciation for what it was like growing up in the 1960s, where everyone was into drugs and free love and whatever else that time period was about.

However, times changed and a period of time went by where people weren’t openly talking about cannabis use and it became taboo in mainstream society. The war on drugs, that began in the United States in the 1970s; seemed to be a direct and hostile reaction to the ‘hippie’ days of the 1960s.

Fortunately, in 2018, Canada became the 2nd country in the world to federally legalize recreational use of cannabis, over the age of 18-19, depending on your province. These days, consumers are reaching out to learn how to smoke, vape, dab and even how to grow their own pot plants (4 plants/household).

Make no mistake about it, you are never too old to listen to your parents and many adults; particularly women, still put a great deal of importance on what their parents think of them. As such, for some young adults, it becomes increasingly difficult to reach their full potential in life because they worry too much about what their parents think they should do; instead of, focusing on their own needs, dreams, successes and failures.

Imagine sitting down with your 80-year-old mother or grandmother and telling her you use cannabis on a regular basis. Would you do it? Some answers might surprise you. Consider why you might hesitate; your parents are probably curious about the green stuff themselves,  so if you explain your usage of cannabis in a respectful and responsible way, you can alleviate some of the common myths that are associated with cannabis users.

For a brief period of time, having a prescription for medical cannabis was seen as a new and cutting edge licence to possess; however, times have changed and pay for access, through licenced marijuana all-in-one clinics, have become popular. As a result, medical cannabis cardholders skyrocketed across the country. 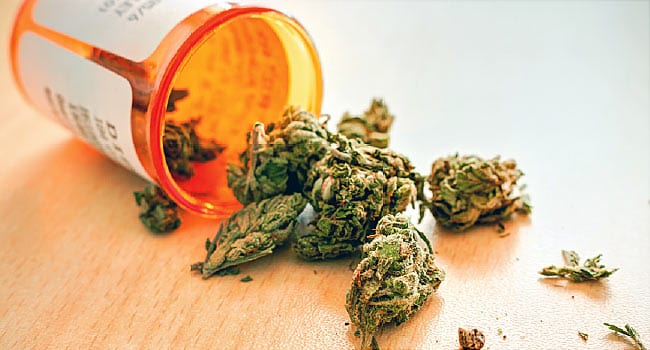 In 2019, that medical card just means you pay incredibly high prices, in addition to taxes (prescriptions in Canada are tax-free, but not cannabis). However, for a select portion of our population, it is extremely difficult to discuss their medical use of cannabis; especially with their parents.

The belief in some deep-seated misconceptions about pot users may be an obstacle to overcome. Prohibition of cannabis in Canada dates back to 1923 when cannabis was villainized. The media in the United States also played a large part; Canadian’s consume more U.S. media than our own Canadian content.

Our advice for this situation is: Imagine all of the person(s) objections. Use facts to dispell each belief and then have a mature and evidence-based conversation, with references nearby to back up your claims. We then recommend that you then tell them how marijuana is helping you personally. Tell them specific instances where marijuana has had a positive effect on your life. If resistance occurs, do not escalate. Offer the person(s) literature on the subject, if available.

There are also some legitimate concerns concerning the lack of long term research associated with cannabis use. As the second country in the world to legalize recreational use, Canada will be at the forefront of innovation and scientific discovery. The key to any persuasive conversation is to actively listen to your parent’s concern and truly consider what they have to say; allow them to feel heard. This will hopefully allow an open and adult conversation about the issue.

Resistance might happen; perhaps, it’s even normal. Misconceptions and judgements can pile on top of one another, allowing people to hold onto rigid beliefs, that might not reflect the current generation and societal norms. Be the ocean to their mountain; those beliefs were not all built overnight and you may need to slowly chip away at their erroneous beliefs, a little bit at a time.

Sit Them Down and Hear Them Out

Before you jump down their throats about cannabis use or the lack thereof; let them have their two cents. There is no need to try to get them to adopt your way of thinking, but you might be able to find some common ground in agreeing to disagree.

Show your parents what cannabis use is really all about. Introduce them to the idea of an online headshop and how you can quickly and easily get access to the products and supplies you need with new technology and new laws. If they aren’t into it, that’s fine. Respect them for that. Allow your parents to absorb the new information and go about your business.

Unfortunately, no matter how old we get, we all might keep secrets from our parents. Using cannabis isn’t illegal in Canada anymore, but that doesn’t mean that people still don’t have reservations about it. Until we understand more about it and it is widely accepted as common practice, you’ll be better served to keep it to yourself in professional situations and never admit to using cannabis at the US border.

In other areas of your life, it might take some convincing for some family and friends to come around to your cannabis use, but if you remember to stick to the facts first, followed by your own personal positive experiences and manage to stay calm and rational against their irrationality, you will have a great chance at eroding their misinformed beliefs.

It is also a good idea to look within yourself to ensure your cannabis use isn’t affecting your daily life. Listen to the criticisms with an open mind and be willing to seek common ground. For instance, mommy wine memes have become a regular occurrence in my social media streams, why is one so accepted; while by far, cannabis is the safer choice to consume. (link cannabis informational)

Educate Yourself to Stay Informed

One of the most important things you can do in talking to your parents is to encourage them to become informed citizens about an issue that affects so many Canadians. Cannabis is used widely across the country and is medically legalized in many states in the US.

Furthermore, countries across Europe have decriminalized the use and possession of small amounts of cannabis; as well as, legalizing medical marijuana. There’s no doubt that there is a wide variety of myths and opinions about cannabis use; however, having the right, evidence-based information is the first step to an educated conversation.

Again, we can’t stress enough: Don’t point fingers and don’t expect others to adopt your way of thinking; especially parents who may be in a past generational mindset. Just encourage your family to be open-minded and take the time to educate them, if they are open to receiving the information. Hopefully, your family will want to learn more and will seek out some information for your next conversation. Remember, oceans slowly erode everything, even mountains!

Have any experiences you’d like to share about ‘coming out’ to family and friends about your cannabis use? Please leave us a detailed message below in the comments!