Looking for best hash avaliable from MOMs in Canada?

This article takes you through three of the best examples of mail order hash that you can purchase online through a dispensary in Canada.

This article is for you if you prefer super potent hash instead of smoking normal cannabis.

But before we look at the top hash products in Canada…

What is hash, and is it legal in Canada?

Hash has been around for ages; it was there before we could even understand how to make other extracts like oils, shatter and wax.

It is created from the resin that laces the outside of your cannabis flower (trichomes). You can see the frostiness in some nugs. That frostiness, the trichomes, is turned into hash through a number of a different methods.

So is it legal to mail order hash in Canada? Absolutely Yes. In 2018, Canada legalized cannabis use for medical and recreational purposes.

Since hash is a product of dried cannabis, it makes it 100% legal to have it delivered to your doorstep.

How to smoke hash

This is a question that many novices will ask. However, the right way to ask this is, “how to enjoy hash.” Why?

You see, hash offers a variety of ways to take it in. Thanks to its high potency levels, you can use it with other cannabis products to increase their potency. Traditionally, hash is edible and some people enjoy putting pieces in their tea or coffee. Doing so elevates these drinks in an exciting way and can help with relaxation is a discrete way to get high.

Today, you can apply hash on top of a joint, blunts or even a spliff to enhance its cannabinoid profile.

Can you vaporize hash? The answer is a solid, yes. However, this is only possible using special vaporizers that have screens that filter the carbon residue present in some hash products.

Top 3 hash in to order from MOMs in Canada today

In our search for the top hashish products that you can mail order right now, we found:

What made us choose these three? Let us have a deeper look at each of them.

When Apple releases new gadgets, thousands will patiently queue to be the first to own one. The same would be the case if it sold the Apple Moroccan Blonde Hash. But why queue when you can mail-order your hash with a few clicks? There are some great reasons to list this first in our selection of the top three.

Morocco is the world’s largest producer of hash. When it comes to skilful hash making, the country is counted as one of the most experienced makers. The Apple Moroccan Blonde Hash from CannaWholesalers is sourced from the finest cannabis growers of this North Western African country.

The hash comes heavy with a sweet flavour and aroma that complement its blonde colour. Out of the bag and into your hands, it is non-brittle, soft and fresh. This makes it easy to work with according to your liking (especially for smoking and dabbing enthusiasts). This is complemented by the fact that Apple Moroccan Blonde Hash has very low carbon content, which means low smoke.

What are the effects of taking Apple Moroccan Blonde Hash? Simply put, you should be ready to get blasted. This hash offers a heavy couch-lock and gives off a smooth and mild energy when it starts to wear out.

If you want to mail hash sourced from the finest cannabis growers in the Afghani straight to your door, try Gold Seal Afghani Hash, you will never regret it.

Here is what you need to know about this hard-hitting cannabis extract:

Most Afghani farmers use Indica landraces or dominant strains to make their hash. Expect to get intensely relaxed before drifting into a deep slumber after using Gold Seal Afghani Hash. The high is strong and lasts longer than what you will experience from the average hash.

Many hash connoisseurs have likened the Gold Seal Afghani Hash to old school hash of the sweet 80s and 90s. Now, if you ever tried hash from this time, be ready to time travel and savour some nostalgia.

The hash has a fluffy texture thanks to the Afghani farmers working on it thoroughly till it is elastic enough. It has brownish hues on the outside and gives rockstar flavours with pungent aromas.

Our list of top mail order hash in Canada would not be complete without hash from Lebanon. But why? It is all in the Lebanese farmers’ way of making hash. Their plants are dried in the field before undergoing further tobacco-like drying in barns. When properly dried, the flowers are rubbed on a fine silk cloth to extract the hash powder, after which it is cured in bags for over four months. 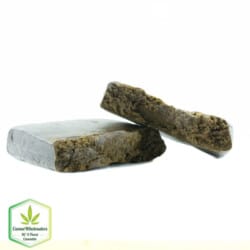 The robust ageing process makes Lebanese Hash very potent as all the cannabinoids and terpenes are well cured. It goes on to offer a spicy taste and very potent effects. The high starts smoothly, working on your stone slowly by slowly, and before you know it, you will be floating in intense sedation.

Lebanese hash takes time to make. This makes it rare to find. However, you can mail order original Lebanese Hash from one of the best dispensaries in Canada and get it delivered at your convenience.

Want to try some hash? We highly recommend you place an order yourselves and try out this amazing cannabis extract.

How To Order from MOMs (Mail Order Marijuana) in Canada