West Coast 420 Express is a mail order dispensary located in British Columbia. They are committed to bringing quality flowers at prices, people can afford. They have a team of experienced flower experts that search for the best price/quality ratio so that you don’t have to. The flowers that they find are some of the utmost quality and all you need to do is read any review including ours to realize that this is a great place to get your weed online.

They have prompt customer support that strives to answer questions within 4 hours, although this can increase during busy periods. Every one of our emails was answered politely and courteously. The package came in an envelope that easily fit inside our mailbox and arrived quickly, within 3 days.

Looking for details on the coupon code?

Read on for our review of 5 strains from West Coast 420 Express:

Rockstar by West Coast 420 Express had medium sized, olive green buds with a large number of golden amber pistils within the bud itself. There was also a dusting of tiny trichomes visible on the exterior of the bud. It smelled of spice and herbs with an extremely skunky fragrance, that was highly pungent and lingered in the air.

When Rockstar was consumed: 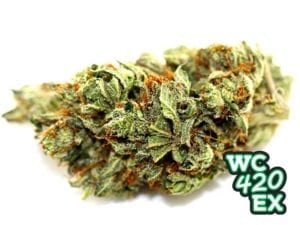 When combusted it produced a spicy and rich smoke that left a burn in my throat and lungs that lasted for a long time. There was a bit of a burn after the hit but the pleasant feeling of the high washed over me and I forgot all about it. The smoke gave a sweet and spicy aroma that had a pleasantness to it, as it remained in the air.

When vaped with the Arizer V-Tower; the vapour had a herbal flavour. The vapour was thick and rich and provided nice voluminous clouds of vapour. I highly enjoyed vaping this strain and I found that it provided the perfect amount of vapour each pull.

The high of Westcoast420express.ca’s Rockstar:

The high of Rockstar was mildly sedating with it helping me with anxiety. The high offered both a head high as well as a full body experience. This hybrid seemed nicely balanced and it was incredibly satisfying to vapourize and smoke.

The medium-sized nuggets of Gorilla Glue #1 were hunter, sage and lime green in coloration. The bud had a nice dusting of trichomes that shimmered in the light as I looked at them. There were plenty of ochre and rusty pistils emanating from every facet of the exquisite bud. 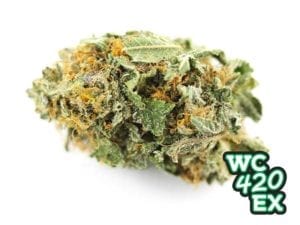 When Gorilla Glue #1 was consumed:

When combusted, its smoke came into the air like something out of a theatrical movie; bursting forth, as if the air was its stage. We found this Gorilla Glue #1 to be far smoother than the other famous strain with its namesake, Gorilla Glue #4. This strain had heavy earthy and woodsy notes to it and these flavours and fragrances lingered long after the hit was consumed.

When vaped with the Arizer V-Tower, the vapour was relatively sparse and quite airy. It had an earthy and woodsy flavour and spicy pine flavours. This is a strain that will awaken your senses with its strong pine scents.  There was also a lingering earthiness to the vapour. The evidence of this vapour disappeared as it dissipated quickly.

Furthermore, Gorilla Glue #1 was somewhat less couch-lock inducing than her sister at first; however, in large doses, this strain will still produce a heavy couch-lock. This strain packs about a 50/50 indica/sativa genetics ratio. Even so, the indica effects are powerful and this strain would be perfect for mild pain control, insomnia, glaucoma, and other medical conditions.

CB Dream from West Coast 240 Express had a vibrant sage, laurel and hunter greens; with bright, ochre-coloured pistils that were scattered throughout the bud. The medium and large nuggets also had a beautiful, sweet woody muskiness as I opened the bag. This indica dominant hybrid is a low THC, high CBD strain produced from Blue Dream and Original Kush. This strain is meant to be used for the medical patient who is seeking relief without the high from THC.

When CB Dream was consumed: 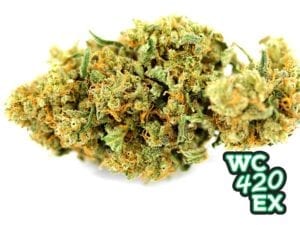 When combusted, this indica dominant hybrid produced a medium bodied smoke; that was smooth on both inhale and exhale. There was an earthy, smokey, and spicy woodiness to the flavour of the smoke; as well as, a pleasant and relaxing earthy, woody aroma, that lingered behind a short while.

When vaped with the Arizer V-Tower, the vapour produced was thick and rich; producing clouds of woody aromatic vapour, that dissipated quickly. Moreover, the flavour of CB Dream from West Coast 420 Express was sublime; reminding me of camping, with a rich, musky earthiness; as well as, the strong flavour of wood.

Alien, from West Coast 420 Express had large and medium, densely compressed nuggets that had a fine sprinkling of fine, white crystal trichomes, that glittered madly in the light. Furthermore, the bud was an amalgamation of forest, hunter and sage greens, with fiery orange pistils smashed in place, scattered throughout the bud. There was also an incredibly sweet, piney smell to the aroma of the bud, which was quite pleasant in to inhale. 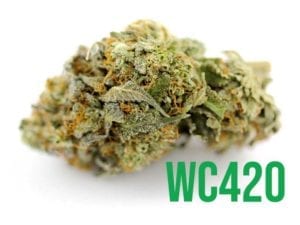 When Alien was consumed:

When combusted, West Coast 420 Express’ Alien produced massive clouds of thick, dense and rich smoke that was pleasantly fragranced of earthy woodiness. In addition, this perfectly balanced, 50/50 indica/sativa hybrid had an arid, earthy and spicy piney flavour that brought me back to campfires, and the delicious taste of that roasted and earthy woodiness flavour coming off all the food over a campfire.

When vaped with the Arizer V-Tower, there was a musky earthiness; as well as, a deep woody spice, that dominated my taste buds. There was also a remanence of a sweet woodiness, that drifted slowly through the air as it dissipated. The vapour was also thick and dense; producing clouds of vapour that resembled smoke in opacity.

Alien from West Coast 420 Express was a potent heavy hitter, producing a relaxed, euphoric, happy and uplifted high; as well as, feelings of calm creativity, that allowed deep introspection. Novices should use caution with this strain, as inexperienced users may feel overwhelmed. In addition, Alien will cause intense couch lock when smoking or vaping continuously.

Moreover, this balanced strain can be used to treat a number of symptoms and conditions, including (but not limited to): chronic pain, multiple sclerosis, fibromyalgia, nausea, insomnia, appetite loss, migraines, depression, anxiety and other mood disorders (as directed).

Blue Mataro’s aroma was very strong. As I opened the bag I detected an earthy and herbal aroma erupting from it. The medium-sized nuggets had hunter green highlights and blue undertones. This strain had speckles of bright orange pistils that were covered in tiny trichomes.

When Blue Mataro was consumed: 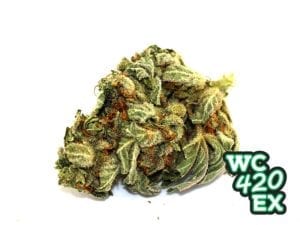 When combusted this strain produced a very smooth smoke that also left behind the fragrance of berries. There was also earthy notes to the flavour profile; as well as, a lingering sweetness that delighted my senses. We found this strain very easy to smoke; however, be warned, Blue Mataro is not for the faint of heart or novices (unless you want a great sleep).

When vaped with the Arizer V-Tower, this strain produced an airy vapour that dissipated in the air quickly and was very easy on the lungs. The vapour produced had a heavy aridness to it as well. Keep some water on hand for this powerful indica dominant hybrid.

The high of Blue Mataro came on quite quickly and was heavily sedating. Make sure that you are near a couch or a bed because you will be collapsing into one shortly. This is the perfect strain for treating sleep conditions; as well as, nausea, migraines, fibromyalgia, multiple sclerosis, chronic pain, opiate addiction and recovery, depression, anxiety and other mood disorders (as directed).

Everything that we sampled from West Coast 420 Express was exquisite and we are certainly thinking about ordering from them again in the future. Their bud; which we tested 5 strains of, smelled fresh and well cured and were fine individual examples of each of the named strains. All of the packaging was packed neatly and the labelling clearly indicated what was inside the package and there was no smell to the package whatsoever.

From everything that we can see, we can tell you that this dispensary is clearly dedicated to providing its customers quality product on each and every purchase. We highly recommend West Coast 420 Express’ flowers and look forward to trying and reviewing more products from them in the future as this MOM is worth ordering from again.

We are lucky enough to have a coupon code for West Coast 420 and it’s “GTA15″ . Just enter this code at checkout and you are set with 15% off your order!

Restrictions: Only applicable to flowers, does not apply to sale items and $99oz section. A limit of $500 max purchase.

If you enjoyed this one. Check our Herb Approach review to learn about another amazing online dispensary.? Then please leave us a comment below and use our sharing buttons. 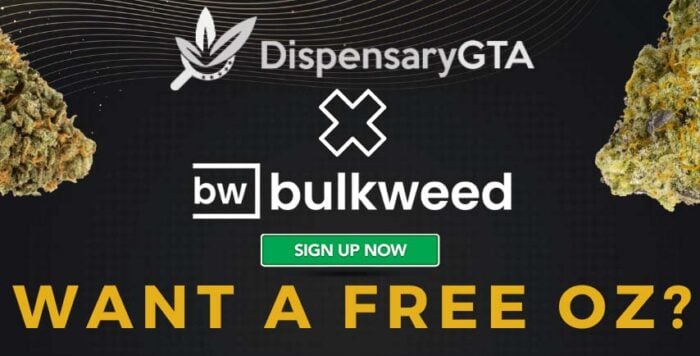