Kana Post offers within its website, a loyalty program that is designed to give the best value for return customers. Loyalty points can be earned from purchases and used toward future purchases for a nice discount at checkout. Specifically, the website will reward you with 5% from every purchase and convert that into Kana Points. The website also allows you to earn Kana Points from friend referrals or for writing a review on the site.

Additionally, Kana Post has the best in the business when it comes to discreet, secure, and safe packaging of cannabis material orders. We haven’t seen a more dedicated and thorough packaging process at DispensaryGTA, that beats Kana Post’s methods of x-ray protective material and vacuum packaging.

Banana Kush is a hybrid of Ghost OG and Skunk Haze. The strain is well-known as one of the legendary creations from cannabis hybrid breeding on the West Coast, specifically California.

The indica dominant hybrid arrived in a discrete package, just as promised by Kana Post and immediately filled the room with a decadent, rich, skunky smell; as soon as I opened the main container. The scent continued to billow out of the package while it was open and entirely assured me that I would be satisfied with this strain purchase before I even looked at, or cracked my first nug of Banana Kush.

The SimplyBudz that I first pulled out could’ve been the perfect model for the strain’s product photo on Kana Post’s website. It was coated with a vibrant, almost diamond-like, layer of trichomes, complete with numerous orange pistils; that all balanced perfectly with the emerald-green nature of the bud. 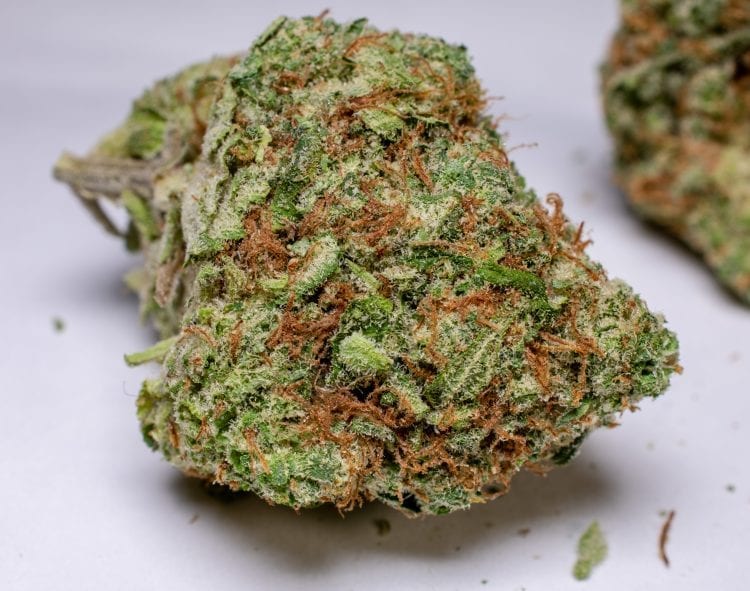 When combusted, Banana Kush nearly knocked me over with its powerful smoke, that seemed to expand within my lungs. Although it was a strong, thick, pure-white cloud of smoke, it didn’t burn the back of my throat and wasn’t too harsh overall. The taste produced from the combusted Banana Kush managed to hit all the same notes as earlier, when I first smelled it, with a newfound emphasis on sweet fruits and earthiness.

When vaped, Banana Kush from Kana Post truly, truly unleashed its full terpene potential and this time, didn’t knock me over from its powerful vapour; but from its wonderfully detailed flavour profile. The earlier flavours of sweet fruit and earthiness that I experienced were increased tenfold with the vaporizer. The vapour packed an immense, thick and flavourful vapour, that consisted mostly of sweet berries, fruits, and a dank earthiness, with a hint of pungent gasoline.

Kana Post’s Banana Kush had me extremely satisfied due to its dank quality in smoke, smell, and flavour. I felt a high that was energetic, uplifting and complete; albeit, with a severe case of the munchies.

Banana Kush also enhanced my mood in a positive way, to say the least. The day that I received my order from Kana Post had been a tough one for me, but Banana Kush turned that all around and helped me let go of what had bothered me earlier in the day in seconds.

Moreover, this daytime strain would be helpful in treating a number of symptoms and conditions, such as (but not limited to): chronic and persistent pain, difficulty sleeping from insomnia, depression, anxiety, fibromyalgia, opiate addiction and recovery and PTSD.

Charlotte’s Web is a strain that is unlike many others. This strain of cannabis has been specifically bred to contain an extremely low amount of the psychoactive ingredient tetrahydrocannabinol (THC); in favour of, cannabidiol (CBD).

THC, which causes the “high” sensation when the dried flower of cannabis is combusted and inhaled, is not like CBD. CBD offers a pain relief option, without any “high” sensation. The Stanley Brothers, the cultivators responsible for Charlotte’s Web, bred the strain in order to extract high-yield amounts of CBD for medicines that reduce seizures caused by epilepsy in children.

The indica dominant buds that I received were equally beautiful as its true cannabis counterpart. I immediately noticed that an even coat of fire-orange pistils was dabbled throughout each bud, and honestly, I had never seen such uniform quality with its neon green coloration, massive amounts of amber and white trichomes and of course, a plethora of firey-orange pistils. The indica dominance of Charlotte’s Web would usually provide some kind of “couch-lock”, but this CBD-focused strain doesn’t go for that. It provided me with a calming effect, through the smoke that was smooth, crisp and full of flavours; that delighted my palate. I could piece together hints of an earthy flavour, along with a less than subtle, main course of dense, almost-minty evergreen and pine-packed, with a tart sting of citrus.

When vaped with the Volcano, it was surprisingly on another level. The flavours through the vape became refreshingly crisp, clean and pure in a way that I could not receive with the more common, combustion route.

Furthermore, I was able to rip big, flavour-filled and voluminous clouds of thick, pure-white smoke with the vape. Now, let me tell you, the flavour of Charlotte’s Web with the Volcano was pine tree city central. I could taste the cleanest pine flavour and to my amazement, the citrus toned down to more of a fruity-floral mixture, that really gave a welcome to the earth flavour hint that I had detected earlier.

Charlotte’s Web met my expectations and then blew them out of the water. The flavour that I received when I vaped those precious nuggets was an unimaginable level of wonderful pine and flowers, that I had not experienced before. The ability to relax with a cannabis substitute that won’t cause the “high” associated with THC was something that I had longed for and now that I found it with Kana Post, I couldn’t be happier.

Moreover, this daytime strain would be helpful in treating a number of symptoms and conditions, such as (but not limited to), seizures, epilepsy, muscle spasms, fibromyalgia, arthritis, depression anxiety and other mood disorders (as directed).

This indica strain with a sci-fi inspired name has a North American Indica and White Rhino lineage. The strain is touted to be cerebrally focused by cannabis connoisseurs; with a nice body quality to it as well. The strain is usually more than 20% THC with 1% of both CBD and CBN.

The stink from these Romulan buds; as soon as I opened up the batch of Kana Post’s package, easily had to be the stinkiest stuff that I ever had the pleasure of coming into contact with. I swear the wonderfully dank and cologne-like pungent smell of pine from the Romulan nuggets filled my house, after a few brief sniff tests. The dense buds had a crazy amount of trichomes on the outside that left my fingers incredibly sticky after only a few touches. 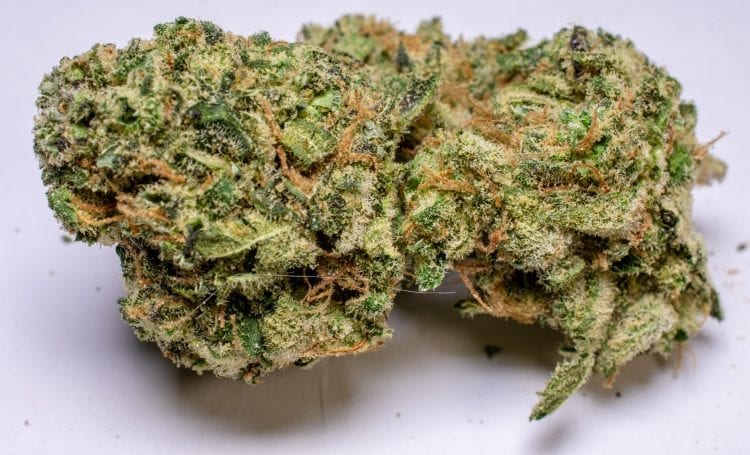 When combusted, Romulan released everything that it had to offer within its aromatic profile and transferred it into its smoke flavour profile. The cologne and pine flavours definitely clung to my tongue after inhaling and especially after I exhaled and coughed for a bit. I could still notice its flavourful pine, cologne and heavy gasoline remnants.

The smoke for Romulan wasn’t harsh, but it wasn’t relaxing either. You could definitely tell that the strain’s dank nature had something in store for you upon inhale; particularly, for me, it had in store lots of coughing. Please be sure to have water or a healthy beverage on hand for this mindblowingly, strong smoke.

When vaped with the Volcano, I was awestruck at the added level of potency, that a vape could add to an already potent strain of cannabis. The vapour from Kana Post’s  Romulan consisted of an almost painfully sharp, dank and tasty vapour, that reminded me of a wintery landscape with evergreen trees next to a gas station. A key benefit with the vape is that it significantly reduced the amount of coughing that I had experienced previously with combustion.

Kana Post’s Romulan was so dank and potent, that the vaporizer was definitely the best choice that I could have went with. The potency of the strain leaves little time to feel the effects and provides a quick turnaround with little downtime.

The high jumpstarted my system with some euphoria, creative thoughts, and happiness, but then eventually led me to feel relaxed and very sleepy. This strain will also make you into a fridge thief because of the munchies; if you can manage to stay awake long enough and try to tame your ever-growing hunger.

Moreover, this daytime strain would be helpful in treating a number of symptoms and conditions, such as (but not limited to), chronic pain, arthritis, PTSD, muscle spasms, stress, difficulty sleeping from insomnia, fibromyalgia, multiple sclerosis, parkinson’s disease, glaucoma, opiate addiction and recovery, depression, anxiety and/or mood disorders (as directed).

This indica dominant cross of two fantastic strains from Kana Post consisted of dense, purplish, trichome-rich buds, that glistened from my overhead light. The deep purples with Strawberry Nuken were alongside deep, dark, forest-green valleys, that got contrasted perfectly with lime-green portions and a light amount of tiny orange pistils. 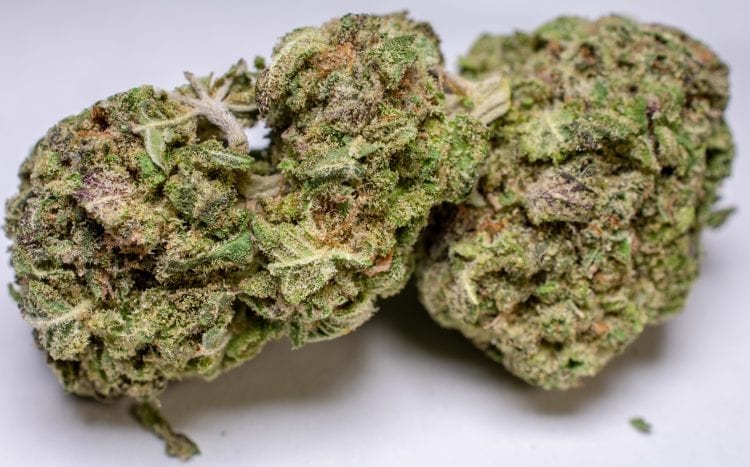 Strawberry Nuken had an indica dominance that made itself known, through a weighty smoke that filled the room with a skunky aroma in no time at all. The smell of the strain was often attributed to skunks, but there was a floral smell that occurred; as well as, small trace scents of an earthy, woodsy nature.

When vaped, I was instantly elated by the pureness of the flavour from the vape. I knew that I soon wouldn’t be able to get enough of Strawberry Nuken’s, woody earthiness, with a heavily prevalent, skunk undertone. It was so flavourful, rich and refreshingly clean with the flavours in a way that I had never experienced before.

Kana Post’s Strawberry Nuken was impressively strong, tasty and had an overall balanced smoke, that I am 100% certain I will purchase it again. The purple, moist and perfectly cured buds really reminded me of some old school purp, that I had back in the day. It was great to have that memory from the past come up and to be able to experience something, that I had once thought to be lost. Finally, once again, I was able to experience that relaxation, sense of euphoria and an uplifted mood; as well as, a cerebral experience that was out of this world.

Moreover, this daytime strain would be helpful in treating a number of symptoms and conditions, such as (but not limited to), nausea, ADD/ADHD, issues with chronic pain, depression, muscle spasms, difficulty sleeping due to insomnia, gastrointestinal disorders, inflammatory diseases, anxiety, depression, fibromyalgia, multiple sclerosis and opiate addiction and recovery (as directed).

Kana Post is a quality, online dispensary of only the dankest, freshest and prettiest cannabis buds, that will satisfy all who come to visit and shop from their website. The overall design of the site is geared toward a streamlined approach, with respect to visitors on mobile and desktop versions.

On top of the wide range of cannabis products, expertly designed mobile and desktop platforms, there is also the loyalty program that provides customers with extra value through Kana Points, on every purchase. So, once again, don’t look any further or harder than necessary for an online Mail Order Marijuana, or MOM, cannabis dispensary website.

Kana Post will be the final place that you’ll end up at after an endeavour to locate the MOM dispensary online that fits your wants and needs. Our wants and needs were met and definitely exceeded by Kana Post’s quality cannabis products, and if you have a similarly positive experience with a Kana Post product, be sure to let us know!

Use the coupon code “DispensaryGTA” for 10% off Kana Post 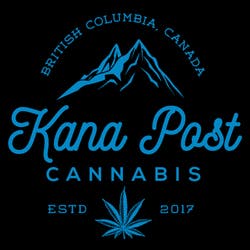 Have any questions or comments about Kana Post or one of their many strains? Please leave us a detailed message in the comments!