Bud2Hand.com is an online dispensary specializing in high-quality cannabis products and has been in the game since 2013. Reaching over 4000 customers, Bud2Hand.com has been an innovative leader in researching the best strains for patients’ needs.

This innovative, mail order dispensary is very passionate about promoting the multi-functionality and highly diverse properties of the cannabis plant as a medicine; to treat many different diseases. This MOM only provides the best to customers, having a smaller selection; but in that selection, Bud2Hand.com has some treasures, with new products coming soon.

Bud2Hand.com’s Rockstar, is a brilliant combination of Rock Bud, and Sensi Star, reaching anywhere between 14-19 % THC. With an average THC level, Rockstar promises to pack a steady punch; however, it won’t leave you too sedated.

The nuggets received by Bud2Hand.com were magnificent; being very bulky and a sizable length. The size of the buds alone had me excited to get to writing about this classic amongst strains. 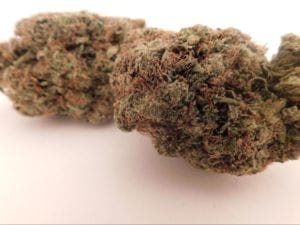 The gorgeous Rockstar had a green variation in colour between laurel and sage. The buds also stood out with large, bronze pistils that appeared to be reaching to the sky; next to hunter green, sugared leaves, that were tightly pressed in the bud. In random spots of the nuggets, I observed a very light hue of purple, which gave the nug a mystical feeling. The aroma given off by Rockstar was sweet, earthy, spicy and rounded out the fragrance profile with a hint of skunk.

When combusted, Rockstar had a rich smoke that filled the air with a thick cloud, that hung in the air lingering, for what seemed like forever. At first, the flavour was dominated by a skunk-like blast, that was followed by a sweet flavour, that hinted at grapes and ended with a spicy note. Rockstar was a delectable strain when combusted and definitely a go-to for me, based on flavour alone.

When vaporized with the Volcano Plenty, Rockstar’s sweet, the grape flavour was absolutely exquisite and delighted my taste buds. The flavour when vaporized tasted almost like wine, with a very pronounced tannic flavour; however, after vaping a while, hints of the skunk profile began to creep up and seep through the entire flavour profile. The vapour was also rich when it filled the air and left a grape musk scent, lingering for a while. Moreover, instantly, the pain-relieving effects of Rockstar set in while vaping; which was astounding to me, as Rockstar felt like more of a creeper when combusted.

The effects of Rockstar were powerful and proved to be great for improving my mood. It was a happy-go-lucky strain, that brought on strong bouts of hunger. Be prepared to stock up on those munchies, as the hunger level Rockstar dished out was absolutely unbearable. Rockstar was a strain that all smokers and/or vapers can enjoy, together when possible.

I like to think of Rockstar as a social strain, as it was fun to smoke with friends, due to the happy and euphoric feelings it delivered. Rockstar was also a strain I would recommend to anyone looking to relax, de-stress or generally, have a good time; as it had a nice, predictable high, that gave a good mixture of both Sativa and Indica properties.

Bud2Hand.com’s Rockstar would be useful in helping to treat a number of symptoms and conditions, such as (but not limited to): pain, glaucoma, migraines, nausea, appetite loss, opiate addiction and recovery, muscle tension, inflammatory diseases, fibromyalgia, multiple sclerosis, depression, anxiety and/or mood disorders (as directed).

Next up on the list from Bud2Hand.com was the Indica dominant hybrid, Blueberry. Blueberry is a definite classic, being a favourite of smokers and growers alike. The lineage of this old-school strain is mostly unknown, with its origin story tracing its way back to the 1970s. The fact that this strain has survived nearly half a century, speaks volumes about the flower’s stellar flavour and its powerful effects; stemming from its potent THC content, which can reach up to 24%.

The Blueberry strain from Bud2Hand.com had medium-sized buds that were olive green. The flower was also dense, well cured and had a significant blue hue, as a vibrant and delicate undertone. The fragrance was a fusion of an incredibly potent, sweet berry and a slight woodiness. 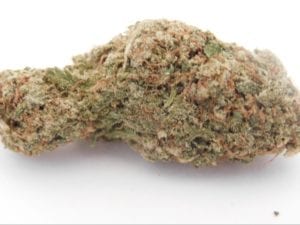 When combusted, Blueberry’s smoke was thick and pungent with an accompaniment of its sweet, berry flavour. I ended up smoking a few in a row, just to get that flavour again and again. Though I’ve had stronger flavoured berry strains, the classic taste of this strain makes it my favourite in this category. The smoke left a lovely fragrance, easily comparable to fresh-baked blueberry muffins, which had me munching out in no time.

When vaped with the Volcano Plenty, the flavour of the vapour had an exquisite and pronounced berry flavour, that could easily be described as sweeter than combustion. The flavour became so sweet as I vaped, that the Blueberry flavour became candy-like. Blueberry also produced stunning clouds of vapour that filled the air and sat idly for a few minutes before dissipating. All that was left after a few minutes with a light sweetness in the air, with a barely noticeable, pine undertone.

Bud2Hand.com’s Blueberry was an absolute delight. A very tasty, well-balanced strain, that had me reminiscing on the first time I ever smoked it. The effects of Blueberry were spectacular, making you feel happy and relaxed; however, also be wary, as Blueberry can creep up on you; having you see stars, closely following your head hitting the pillow. Blueberry also led to a spark in creativity; which drove my focus for a while, before knocking me out flat.

Furthermore, Bud2Hand.com’s Blueberry would be useful in helping to treat a number of symptoms and conditions, such as (but not limited to): chronic pain, glaucoma, nausea, opiate addiction and recovery, inflammatory diseases, fibromyalgia, chronic stress, multiple sclerosis, migraines, muscle strains and sprains, lack of appetite, depression, anxiety and/or mood disorders (as directed).

Bud2Hand.com also had a good selection of edibles on their website. The one I chose to sample was Skunky’s Sour Faces; which, as a package, had a decent amount of THC sitting at 225 Mg. The packaging was humorous, having a skunk as a logo, which made the product more appealing all around. As I opened the bag, I became excited as the aroma of the candies wafted out of the bag; it was reminiscent of high-quality, expensive candy. 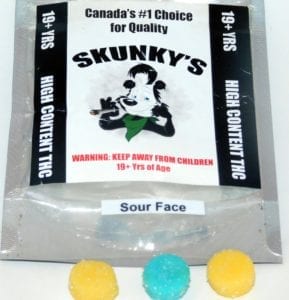 Half of the bag later, 45 minutes had gone by; I felt a sedating body high take control, numbing all pain. The candies also gave my entire body a warm and flush feeling. Feeling brave, I decided I would finish the entire bag of delicious candies. I then became glued to the couch; paralyzed and numbed to the outside world.  These powerful candies chose the right time to sneak up on me, as I took them right before bed.

Furthermore, the gummies had the perfect texture. They were easy to chew and went down without leaving a potent aftertaste of ganja. Bud2Hand.com has a true winner with Skunky’s Sour Faces. I personally couldn’t get over how fresh and fruity these candies were. As a person who is critical of many edibles, I couldn’t find one negative about Skunky’s Sour Faces.


Moreover, Skunky’s Sour Faces would be useful in helping to treat a variety of symptoms and conditions, such as (but not limited to): chronic pain, glaucoma, nausea, opiate addiction and recovery,  muscle strains and sprains, inflammatory diseases, fibromyalgia, multiple sclerosis, migraines, appetite loss, depression, anxiety and/or mood disorders (as directed).

The Peazy Pen is a sleek and stylish way to get a potent blast of THC. This distillate pen had an all-black stem and a screw-on cartridge. When you put these two things together, you got one, beautiful blast of THC. The Peazy Pen from Bud2Hand.com comes with a USB charger, that screws into the same spot as the cartridge, making it very useable; however, the downside is you couldn’t smoke and charge at the same time with this particular pen.

This revolutionary way to consume fine concentrates had an innovative operating system, that was very easy to use. Firstly, to turn on The Peazy Pen, you must lightly tap the bottom button 5 times. Next, you press the bottom of the pen, 4 times to preheat it. The heating system for The Peazy Pen is colour-coded; with the light changing colour when you turn up the voltage. As for power voltages(V), green stands for 2.4V, blue stands for 3.2V, and Violet(my favourite) for 4.0V.

Furthermore, I was using a cartridge of Blue Dream distillate, that had a THC content of 89.94%. When vaporized from the Peazy Pen, the Blue Dream distillate had a sweet surge of a potent and seductive, berry flavour. The vapour was also silky smooth, as it travelled deep into my lungs. The functionality of the Peazy Pen made it very easy to switch between different environments discreetly (even family functions, shhh). The pen was accurate, delivering the same measured dose, each time I pulled on the distillate pen.

After using the Peazy Pen for a few hours, I noticed one downside. When I acclimatized to the pen, my tolerance to the distilate developed quickly. I would highly recommend having more than one cartridge. By being able to switch flavour profiles, it tends to contrast and contain the amount you can use in one sitting. Nonetheless, Bud2Hand.com have found a marvellous product in the Peazy Pen. This easy, compact, accurate and ready-to-travel distillate pen is perfect for anyone who is on-th-go; while still requiring their medicine.

Moreover, the Blue Dream THC distillate (89.94%) would be useful in helping to treat a number of symptoms and conditions, such as (but not limited to): chronic pain, nausea, glaucoma, opiate addiction and recovery,  muscle sprains and strains, inflammatory diseases, fibromyalgia, multiple sclerosis, migraines, appetite loss, depression, anxiety and/or mood disorders (as directed).

Bud2Hand.com, is a great little online dispensary that aims at the eclectic side of things only having the best of the best merchandise for their customers. The smaller inventory, at this cannabis outlet; doesn’t mean a thing once you sample the quality of the product.

The product’s on the website range from some of the most scrumptious edibles, to potent flower, and out of this world concentrates; these attributes alone make Bud2Hand.com a true hidden treasure and a must for anyone looking for a safe and user-friendly way, to re-fill on their cannabis supply.

In this article, I sampled a variety of cannabis products from Bud2Hand.com. These products included flowers, edibles and high quality, THC distillate. This online dispensary exceeded all expectations; customer service was stellar, and they delivered high-quality products and a pleasant, memorable experience .

Bud2Hand.com was a consumer-oriented company; focused on building relationships and relaying the best possible customer service to their valued patients. Bud2Hand.com delivered top-quality products at reasonable prices and you will be hard-pressed to find better quality.

Also, have any comments? Please leave a detailed comment below!!

Where To Buy Cheap Shatter Online in Canada