420VapeNation is a Canadian small business specializing in small batch, craft, liquid shatter e-juice vape cartridges. The owner is a local connoisseur and craftsman; who takes immense pride in his work and works tirelessly, to ensure quality and customer satisfaction.

Furthermore, this vape cartridge company uses liquid shatter as their source of concentrate, which allows users to experience a full range of sativa or indica effects; as well as, the beautiful full flavour of the plant; unlike distillate (Distillate loses all original plant terpene content.).

In addition, 420VapeNation uses a slow and controlled, multiple day process to make the liquid shatter, to ensure there is no separation between the shatter and the diluting solution. Moreover, the shatter is diluted with PEG and PG only (and good thing too, as I am allergic to VG based products!). Furthermore, 420VapeNation also adds additional terpenes to some of their products, to create a more flavorful, enjoyable and sometimes, an even longer high.

This craft cannabis vape producer also enacts strict quality control to ensure no leaks occur during and after the filling of the cartridges. Each cartridge fits a standard 510 battery (although modded ones are not recommended). Furthermore, each and every battery that is sent is thoroughly checked and tested to ensure nothing will impede their valued clients’ vape sessions.

Moreover, we received the “sour grapes” special, which included 4 themed liquid shatter 1ml cartridges, a battery, charger and the Xpresspost shipping; all for only $155. The order took only 2 days (after order completion) from Ottawa, Ontario.

420VapeNation’s website was simplistic and easy to use. This company even had a very useful tips and tricks section, that gave me a pointer I was unaware of! Customer service was also friendly and professional; helping us step by step, whenever needed. The package normally ship in a relatively small box; which would fit in most standard sized mailboxes. There was no odour to worry about because vape pen and cartridges are completely self-contained and omit no odour. 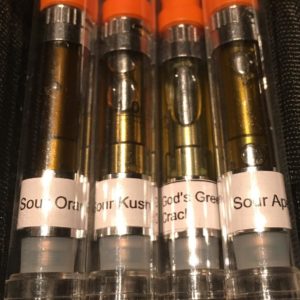 The cartridges I received

God’s Green Crack is a cross between God Bud and the sativa strain Green Crack. It is a relatively balanced strain, delivering a 50/50 indica/sativa ratio. 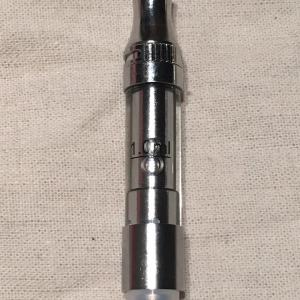 Moreover, the vapour produced from the pen was medium-bodied, with thick clouds of nearly undetectable vapour that dissipated almost immediately. The vapour was also smooth, cool and discreet; delivering a virtually odourless way to consume cannabis concentrates efficiently and stealthily.

Furthermore, 420VapeNation’s God’s Green Crack vape cartridge had a flavourful, refreshing and potent lemon/citrus flavour; as well as, a mild spiciness and a rich, soothing earthiness. This strain also produced a moderate amount of arid dryness in my mouth, be sure to have plenty of water on hand!

In addition, God’s Green Crack from 420VapeNation delivered a euphoric, relaxed and uplifted high; as well as, creativity and a minor energy boost. There was a cerebral mindfulness to the high, that allowed completely functionality during the day. This made the God’s Green Crack cartridge perfect for smoking during the day; up until early evenings.

This cannabis cartridge can also be used to treat a variety of symptoms and conditions, including (but not limited to): ADHD, PTSD, fibromyalgia, multiple sclerosis, appetite loss, migraines, fatigue, depression, anxiety, stress and/or other mood disorders (as directed).

Sour Orange is a sativa dominant hybrid that carried a beautifully powerful sour taste (from Sour Diesel) and a tangy orange citrus flavour (from Agent Orange), that took me for surprise when I first vaped the cartridge. 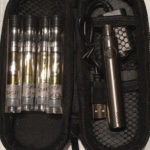 I must say, long and slow inhales seem to be the trick with this cartridge, the coil from this 510 protects the shatter and will not allow it to burn. Near the end of this cartridge I made the mistake of hooking up another 510 battery when my pen went dead from 420VapeNation; and I quickly realized I was burning my shatter and had to stop. We highly suggest you use the pen 420VapeNation recommends.

Sour Orange from 420VapeNation was a sativa dominant hybrid that produced an energetic and creative high that powered me through my day. Be careful however; it was so enjoyable to smoke, I overindulged several times and if smoked in excess, this strain can and will hit you like a truck.

Furthermore, Sour Orange gave focus and relaxation; as well as, a happy and relaxed frame of mind. This strain was extremely enjoyable to vape and would be the perfect daytime accompaniment medication for a number of symptoms and conditions, such as (but not limited to): ADHD, PTSD, fibromyalgia, multiple sclerosis, migraines, fatigue, depression, anxiety, chronic stress, opiate addiction and recovery, stress, and/or other mood disorders (as directed).

With a beautiful lemon, citrusy flavour, Sour Kush from 420VapeNation caught my attention. The flavour was robust, but not overwhelming. The taste of lemon at the end of the draw gave this liquid shatter a  sour kick. The vapour was thick and plentiful, and smelled slightly of lemons for the brief moments before it dissipated. 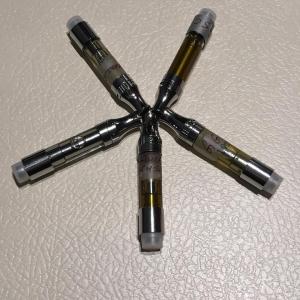 They are holding a meeting

4-5 puffs with this (or any of 420VapeNation’s liquid shatter for that matter) liquid shatter would get you a mild buzz. 5-8 long and slow inhales will definitely even get a high tolerance smoker like me a moderate buzz. 10+ long and slow puffs will send you to the moon; however, you must question whether you really want to be using your discreet, outdoor public vapourizer to get that ridiculously stoned, but that’s just an opinion.

Furthermore, Sour Kush produced intense creativity and relaxation; as well as, a euphoria and cerebral mindfulness, that allowed focus and and uplifted spirit. Moreover, this strain did produce strong feelings of happiness and a giggly mood.

420VapeNation’s Sour Kush is a great daytime, sativa dominant hybrid strain that can be used to treat a variety of symptoms and conditions, such as (but not limited to): fatigue, stress, chronic pain, opiate addiction and recovery, multiple sclerosis, appetite loss, fibromyalgia, PTSD, ADHD, depression, migraines, anxiety and/or other mood disorders (as directed).

Sour ape from 420VapeNation had a pungently sour grape flavour that hit my tongue, and then my senses; in an incredibly pleasant way. The flavour was reminiscent of Lotsa Fizz Candies, that I used to get in the 90’s with my Halloween candy. 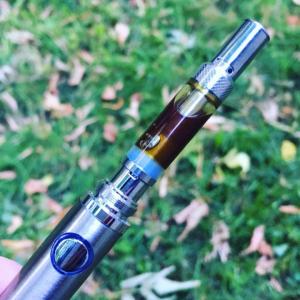 In addition, the flavour was sweet and tart and was the perfect pen to wind down to after my ‘Sour Grapes Special’ rabbithole adventure. Furthermore, the vapour was medium bodied, rich and thick; however, it unfortunately dissipated too quickly to give off any aromatic terpenes.

Moreover, the high from this indica dominant hybrid was a little surprising. It did not sedate as much as I expected and instead, gave a relaxed, uplifted, happy and euphoric high. Sour Ape from 420VapeNation also produced hunger, creativity and a subtle touch of energy that would be best consumed in afternoons and early evenings.

This hybrid can be used to treat a wide range of symptoms and conditions, such as: depression, appetite loss, fibromyalgia, opiate addiction and recovery, fatigue, nausea, migraines, ADHD, PTSD, multiple sclerosis, anxiety and/or other mood disorders (as directed).

420VapeNation is a small, Canadian owned company located in Ottawa, Ontario, that specializes in small batch, craft liquid shatter e-juice cartridges. The company and owner work tirelessly, to ensure the utmost quality and flavour of the cartridges.

Moreover, 420VapeNation’s website was simplistic and easy to use; however, it was also a little outdated and could use a major facelift. However, with this high of quality product (and useful tips!) 420VapeNation is sweeping the underground scene.

These small batch, liquid shatter cartridges are the answer to new impending apartment and condo laws; which will restrict smoking in any form, on or near apartments/condos property! Furthermore, these liquid shatter batches do not last long, in fact; when I went to look at my shatter package, I discovered it was already sold out!

Order 420VapeNation’s cartridge liquid shatter system today and tell us what you think in the comments.

Review of FairCannaCare - Do Not Order from this MOM

BuyWeedPacks Review: The Best Bulk MOM in Canada for 2021