Home / Mould on Cannabis: How to Prevent It
Cannabis How-To ArticlesInformation About Cannabis

Mould on Cannabis: How to Prevent It

Thankfully, there are better ways to store cannabis today than in plastic bags. However, while preserving the freshness of your buds will always be a top priority, something that often gets overlooked is the presence (and effects) of mould.

Unfortunately,  is a common issue marijuana users face. If it is allowed to develop when marijuana is stored, it can have negative health effects; not just the plant, but for you as well. Therefore, it is imperative to know what the dangers of mouldy marijuana are and how to ensure that you protect your plant and yourself from it.

What causes cannabis to go mouldy during storage?

If all the best practices in cultivating your cannabis plants were observed, then they should be mould-free after leaving the curing room. With correct humidity levels, growing plants have natural mould fighting properties; to ward off the toxic spores. It is after harvesting that the plant loses this ability to protect itself, thus becoming vulnerable to mould. 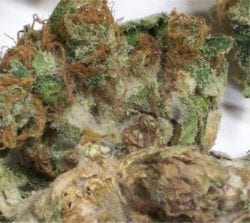 Mould spores are everywhere. Even in a grow room, where there are filters to prevent these tiny spores, just a small trace of mould spores is enough to cause an infestation; especially if conditions are allowed to get humid. The Canadian climate is especially vulnerable to mold spores; as our humidity is relatively high (location depending).

The risk of mould increases when plants are transferred to jars and other containers; which expose them to high rates of humidity. The humidity level in the jar gets higher as you open and close the container periodically; naturally becoming a breeding ground for these microscopic and toxic menaces.

Moreover, there are two main types of moulds that present the most risk to cannabis users’ health; whether they are recreational or medical users. They are Aspergillus and Botrytis Cinerea; more commonly known as, “Bud Rot”.

Botrytis Cinerea is infamous for destroying marijuana plants. It starts from the stem and continues outwards, with a white-gray appearance. It kills the nug by turning a nice, dense bud into a squishy, rotten mess. Dense buds that don’t get enough air retain more moisture, which is what eventually leads to the formation of mould. On the bright side, this type of mould cannot develop on plants after being harvested.

Another common mould among marijuana plants is Aspergillus; which can be found in several areas of the plant, not just the bud. If the spores of this mould reach high levels; it can have serious negative effects on persons with compromised immune systems or damaged lungs.

Furthermore, Aspergillus is mostly found in soils (or any place or thing) that retains a lot of moisture, such as cannabis buds. Unlike Botrytis Cinerea, this mold will attack during storage.

The Effects of Mould

Concern for moulds and other similar issues are of utmost importance; especially with the rise of medical marijuana use. Persons with compromised immune systems are most at risk of the dangers of mouldy weed. If mould starts to grow on your cannabis plants, they will essentially become impotent, useless and dangerous. As such, they should be thrown out and destroyed.

In addition, you can contract deadly infections if you consume marijuana that contains high levels of Aspergillus. You can also develop aspergilloma, which causes varying symptoms from a simple cough, a fever or even, hemoptysis (coughing up blood).

Moreover, If you have a weak immune system, exposure to Aspergillus can result in pulmonary aspergillosis, which sometimes spread throughout the entire body and not just the lungs. This can result in death if left untreated; or if, not treated effectively and quickly. If your weed plant has bud rot, the spores can also harm your lungs; however, the effects are certainly not as dire as those associated with Aspergillus.

How to Prevent Mold When Storing

Consistently dry conditions are the ideal environment for preventing a cannabis mould infestation. Air-tight jars or “bud/nug jars” are generally sufficient in keeping cannabis dry and mould free; however, as mentioned, mould can still develop if the weed is continually exposed to humidity when the jars are opened and closed.

Controlling humidity is thus important. A good range to aim for is a humidity level between 50-60%. In addition to preventing mould, at that humidity level, your nugs won’t dry out too much or too fast, as that too can be unfavourable. In spite of all of this, if marijuana buds retain more than 12.5% of water, they are still at risk of developing mould. These plants retain the humidity in pockets throughout their anatomy; making air circulation critical on a continual basis, to ensure the health of your plants. 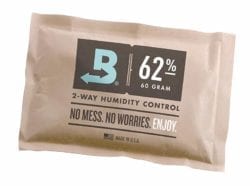 A humidity packet will guarantee your weed is stored properly, preventing mold infestation. Integra makes Boost packets (humidity packets) in two forms; one form guarantees 55% relative humidity and the other a 62% relative humidity. Both of these packets will prevent mould from growing on your marijuana buds by protecting it from high levels of humidity; the personal preference on how dry you like your weed will determine which you choose.

What is also great about these packets is that they have indicators on them that will notify you when they need to be replaced, that way you can always guarantee the plant’s potency. Boveda also makes humidity packets. These packets will guarantee your buds stay fresh, dry and ready for consumption. Cigar boxes with (or without) controlled humidity is another great way to store your buds, but don’t forget the humidity packet!

Let’s say you have already bought a dehumidifier, the circulating fans and hygrometer; you may still be faced with a mould problem, especially with bud rot. The reason for this is because of cannabis nugget anatomy; it makes the perfect place for mould to grow (warm, dark and humid).

Thankfully, ultraviolet light; which is known to increase the THC potency in plants, has been shown to be a good aid in combating mould. The same reason UV light is a potential threat to our skin; is the same reason it is perfect for eradicating mould.

It works by breaking down the DNA of these single-celled spores, thus killing them. If you opt to try this method, please ensure that the light is not shone directly onto the marijuana buds. Overexposure to UV light will diminish the presence of terpenes; which give the plant its aroma.

Mould can be detrimental to your plant’s and your health, but with a little precaution, you can help to ensure that your cannabis plant is mould-free and healthy.

Have any questions or concerns? Please leave a detailed message below in the comments!