Candelivery offers same day marijuana delivery service in the GTA; specifically in Toronto, Etobicoke, Mississauga, Oakville, Burlington, & Scarbrough. They are dedicated to providing Canadians over the age of 19, safe access to medical marijuana, in a timely manner. This mail order and same day delviery dispensary believe that cannabis has many positive properties and that every Canadian (over the age of 19) deserves access to this life-giving medicine.

The product line carried by Candelivery is provided by only the best British Columbian cultivators. Furthermore, this MOM dispensary ensures customers are only offered top quality products. For those considering Candelivery as your next option for ordering, we highly recommend trying their same day service if you are in the GTA area (especially for those who may have forgotten their order for the weekend!).

Candelivery sets the bar for other delivery services to meet. Read on below for our full review of this incredible service:

God’s Green Crack is a nearly equal hybrid strain that combined the powerful hypnotic properties of God Bud and crossed it with the energetic sativa strain Green Crack. As I opened the ziplock from Candelivery, I noticed God’s Green Crack had large and medium, densely compressed nuggets. 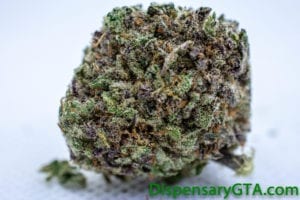 Furthermore, the gorgeous nuggets were an amalgamation of olive, sage and hunter greens, with a violet hue underneath. There was also a generous coating of crystal trichomes on the buds. Moreover, the aroma was earthy with strong hints of potent pine.

When combusted, God’s Green Crack had strong pine flavourings that remained as a powerful aftertaste; as well as, lingering as an aroma. This is not the strain to be consuming if one is looking to smoke discreetly.  The smoke produced was also incredibly smooth; we highly recommend this highly sought after strain if you are a smoking connoisseur.

When vaped with the Arizer V-Tower, this strain’s flavour profile evolved and although the earthy, pine flavour was still apparent; a refreshing and invigorating citrus flavour burst through our senses. Moreover, the vapour produced was dense; resembling smoke in opacity. There was also a sweet fragrance that hung in the air, long after the hit was completed.

The high from God’s Green Crack was phenomenal. This strain produced euphoric and happy feelings; as well as, a deep internal sense of calm. This strain also helped with focus; however, it was also a very potent strain that produced sedation when smoked in larger quantities.

Moreover, this strain would be useful in helping to treat a number of symptoms and conditions, such as (but not limited to): fatigue, migraines, glaucoma, appetite loss, opiate addiction and recovery, inflammatory diseases, fibromyalgia, multiple sclerosis, depression, stress, anxiety and/or other mood disorders (as directed).

Furthermore, novice users should use caution with this highly potent strain until effects are known. This rare hybrid would be a great any time of day strain and Candelivery offers unbeatable, high quality bud; delivered same day, right to your door in the GTA.

The large, dense and well-cured bud of White Cheese from Candelivery were an amalgamation of hunter and sage greens; with light amber pistils spread throughout the bud densely and squished between the compacted leaves. Furthermore, there was a heavy dusting of cream crystal trichomes, that lightly shimmered underneath the light. There was also a potent and sour blue cheese smell that emanated from the grinder; giving me a pleasant teaser of what was to come. 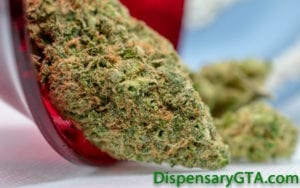 When combusted, there was a massive cloud of a full bodied and aromatic piney earthiness that filled the room with its pleasant fragrance. The was also a refreshing, sour, tangy and spicy pininess to the flavour of the smoke, which was incredibly pleasant. Smoking connoisseurs will fall in love with White Cheese from Candelivery.

When vaped with the Arizer V-Tower, White Cheese had an invigorating, tangy and sour, piney spice that punched through my sinuses and cleared them quite quickly. There was a minty freshness to the vapour that was left as an aftertaste that made White Cheese quite a unique strain. There was a slight earthy pine aroma to the vapour; however, it dissipated quickly leaving no trace of its presence behind.

This strain is perfect for novices as the high climbed slowly and was predictable throughout. Furthermore, White Cheese was not sedative, so it can be used in the daytime and at social gatherings The strain brought an extreme sense of relaxation, slight euphoria, pain relief (this strain contains up to 4% CBD, THC was up to 16%), and a cerebral mindfulness that kept me grounded and focused.

This strain can be used both at daytime and at night and can help to treat a number of symptoms and conditions, such as (but not limited to): fatigue, glaucoma, stress, fibromyalgia, opiate addiction and recovery, multiple sclerosis, chronic pain, muscle spasms, depression, anxiety and/or other mood disorders (as directed).

As I opened the bag from Candelivery, the pungent fragrance of UK Cheese punched my senses. The powerful fragrance of blue cheese, with hints of a spicy, tangy and sour undercurrent, were the most prominent. 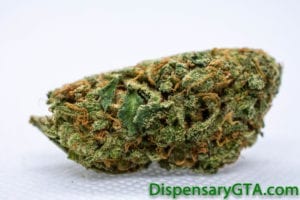 Moreover, this exquisite, indica dominant hybrid was an amalgamation of sage, hunter and olive greens and had bright, ochre-coloured pistils, that were littered generously throughout the bud. There were also thousands of tiny, white crystal trichomes, that sparkled the reflected light.

When combusted, the smoke was dense, rich and silky smooth and the pungent aroma of blue cheese filled the air. There was also an immediate, spicy earthiness, that spread throughout and lingered on my taste buds pleasantly. Candelivery’s UK Cheese also produced a slight aridity in my mouth; be sure to have a healthy beverage on hand!

When vaped with the Arizer V-Tower, there was a subtle flavour profile of a silky, soft earthiness; as well as, a light and pleasant spiciness that made UK Cheese quite pleasant to vape. Moreover, the vapour produced was light and airy, dissipating quickly; however, it left a soft and subtle, spicy pungency; that lingered pleasantly as a fond memory of the hit consumed.

Candelivery’s UK Cheese produced a cerebral mindfulness that could be felt almost immediately. Relaxation quickly followed; in addition to, a creative and calming focus and an energetic euphoria that was the perfect combination for a daytime medication. This indica dominant hybrid was a rare hybrid that balanced its traits and delivered a sativa-like, non-drowsy, daytime high; with powerful pain-relieving and calming indica traits without sedation.

Moreover, UK Cheese can be used to help treat a variety of symptoms and conditions, including (but not limited to): fatigue, appetite loss, migraines, glaucoma, stress, opiate addiction and recovery, fibromyalgia, multiple sclerosis, depression, anxiety and/or other mood disorders (as directed).

The potent and powerful aroma of Rockstar from Candelivery waifed into my nostrils as soon as I opened the bag. This spicy, herbal and skunky variety was highly pungent, well cured and densely compacted. Moreover, the bud had an olive green colouration and had a huge amount of bright, rusty-red pistils; that stood frozen as if they were standing at attention. There was also a generous dusting of tiny, white crystal trichomes covering every surface of the gorgeous looking nuggets. 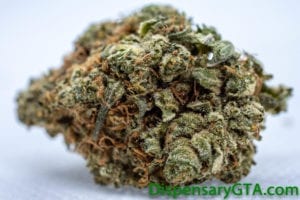 When combusted, this indica dominant hybrid produced smoke that was bold, spicy, rich and was silky smooth on inhale; while, being a little harsher on exhale. There was also a slightly sweet, herbal and skunky aroma that left no room for discretion.

When vaped with the Arizer V-Tower, the vapour had a spicy heat and an earthy, herbal flavour that was layered in the complex flavour profile as a soft, subtle undercurrent. The vapour was also dense and resembled smoke in opacity; however, it was smooth and seductively easy to chain pull.

The high of Rockstar was relaxing and calming; this strain would be perfect for medical users who suffer from anxiety or depression. The high also had both heavy full body effects; in addition to, a focused, cerebral experience that kept me grounded, yet relaxed. Moreover, Rockstar from Candelivery delivered a euphoric and uplifted mood.

This afternoon or evening strain can be used to help treat a variety of symptoms and conditions, such as (but not limited to): insomnia, stress, opiate addiction and recovery, inflammatory diseases, fibromyalgia, multiple sclerosis, migraines, glaucoma, depression, anxiety and/or other mood disorders (as directed).

Moonrocks are a relatively new discovery for me, but they pack a punch unequalled in flower form. Candelivery used IChronic Extracts, that used the strains: Girls Scout Cookies, UK Cheese, Death Star, Critical Kush and Cotton Candy. Furthermore, IChronic’s moonrocks were made by dipping premium buds in hash oil and then packing and covering the delicious nuggets in kief. 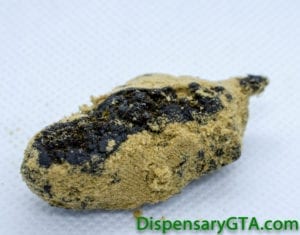 Candelivery’s moonrocks were slathered in hash oil and kief, so much so that there was a healthy layer on the package; as well as, the bud itself (Don’t forget to pack your hash pipe with the gooey remnants on the inside layer of the package as well!).

When smoked, the moonrocks had a delicious herbally hash flavour; as well as, a smoky earthiness, that made my pipe that much harder to put down. The smoke was rich, vivacious thick and dense; producing a full bodied smoke that could be quite harsh when smoking large amounts. Having water or another healthy beverage can help with the harshness. Furthermore, the room was filled with a delightfully woodsy and pungent aroma that could not be easily disguised, so be forewarned!

Moreover, Novices should use extreme caution or avoid moonrocks entirely until more experience is gained. These rocks are incredibly powerful and would render inexperienced users to a place they would most surely find uncomfortable.

IChronic Extract’s Moonrocks delivered a powerfully hypnotic high that was not too sedative. These moonrocks also produced euphoria, relaxation, pain control and a general laziness, that spread throughout all my muscles and melted away stress quickly and efficiently. These moonrocks are best left to afternoons or nighttime where relaxation is the main goal.

These moonrocks can be used to help treat a number of symptoms and conditions, including (but not limited to): insomnia, glaucoma, migraines, chronic pain, opiate addiction and recovery, fibromyalgia, inflammatory diseases, multiple sclerosis, depression, stress, anxiety and/or other mood disorders (as directed).

If you are in need of same day delivery in the GTA there is really no better choice at the moment then Candelivery.

What are you waiting for? Order from Candelivery today and tell us what you think in the comments!.