Home / Cannabis & Sex: A History to the Future
Information About Cannabis

Cannabis & Sex: A History to the Future

Across Cultures and Continents, Cannabis has Sacred, Ritualistic and Utilitarian Uses for Sex throughout the Ages

The most curious connection between cannabis and sex,  comes from the 13th-century writings of Marco Polo. Polo’s writings describe a certain Hasan i Sabbah, the famous founder of nefarious ‘The Order of Assassins’.  Hasan i Sabbah recruited the most loyal contract killers in history with a certain elaborate trick. 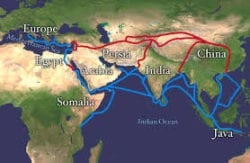 The trick would begin by inviting a candidate to dinner. Unbeknownst to the candidate, Hasan laced the dinner with both a narcotic; as well as, hash (produced from cannabis). The narcotic would produce deep sleep, whereupon Hasan would drag the person from the dinner table into his beautiful garden.

The candidate later awoke extremely high on cannabis to harps playing in the golden sunlight, flowers and fig trees, sweet foods, fragrances, and most importantly, plenty of gorgeous women, offering every variety of sexual gratification.

For someone in the 13th century, this would have been an impossible delight. When the candidate fell asleep again (probably after another narcotic), Hasan would drag the person back out of the garden.

When the candidate later awoke, Hasan told him that he had been to heaven, that Hasan had the key and that only by becoming loyal, would the person ever be allowed to enter again. It was thus that the sex-and-cannabis experience, according to legend, inspired the most dedicated group of assassins in history.

Can cannabis radically enhance sex, even producing a religious experience? As they say, where there’s smoke, there’s fire.

In Northern India, where the Ganges river still runs clean, cannabis is deeply embedded in the social landscape. Restaurants quietly serve yogurt drinks infused with cannabis.  On balconies, on park benches and under shade trees; joints are passed back and forth, with some discretion.

The many holy and nomadic people (“sadhus”, they’re called), often bearded, homeless and draped in orange robes; combine prayer, meditation, and being ‘stoned’ as a state of being. I would often spot them by the river, or outside temples, hunched over their bong, billowing out lungfuls of thick smoke.

When I eventually mustered up the courage to ask one why he smoked so much pot, he made the universal sex sign (index finger & thumb into a circle and index finger of the other hand inserted, back and forth). He laughed, but I was sufficiently uncomfortable that I asked no further questions.

I did, however, do some research. According to traditional Indian medicine (called Ayurveda), cannabis is often used as an ingredient in aphrodisiacs. Also, as a religious sacrament, many Hindus often consume cannabis in connection with the god Shiva. Sometimes, it’s combined with ritualized sexual behaviour intended to bring on heightened spiritual ecstasy.  This has been going on for as far back as written history goes. 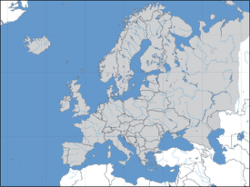 In America, a similar panic developed in the early 1900s, when cannabis transformed from a relatively common medicinal ingredient, into a scary, jailable scourge of the nation.

This remarkable transformation resulted largely from the campaign efforts of Harry Anslinger, the country’s first commissioner of the Federal Bureau of Narcotics. Anslinger claimed that much of the drug’s menace was that it made people behave ‘overtly sexual’.

In the 1960s, when cannabis made its hippie revival, Dr. Timothy Leary, a Harvard psychologist who advocated psychedelic use, also emphasized the sexual aspects of marijuana. The 1960s slogan, ‘sex, drugs and rock n’ roll’ is also a hint. Around the same time (in 1970), a little-known book was published called ‘The Sexual Power of Marijuana’, demonstrating that not only the hippies; but, regular people of the middle class, in surprising numbers, were also ‘turning on’ with cannabis.

The cannabis industry is a strange thing; mostly because cannabis is a strange product.  It’s “dank and far out” and yet, since its legalization in 2018, it’s also just another mass-produced cash crop, branded for public consumption; another celebrity-endorsed pawn, in capitalist games.

Isn’t it strange that sex isn’t much being used as a marketing strategy though?  Sex is used to sell everything from beer to cars to clothes. Yet here we have a product that really does impact sex. It’s something that might even justify the cliche, “sex 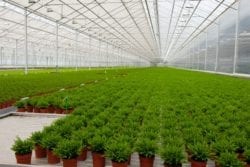 While it’s true that a small handful of businesses are superficially highlighting the sexual aspects of cannabis, it’s a bit mysterious why the entire industry isn’t screaming from urban storefronts everywhere: “Mind-blowing sex is available here!”.

Or perhaps it’s not that surprising. We’ve already seen what happened to the witches and the hippies; imprisonment and much worse. It makes sense that people are a bit shy about what this plant is capable of doing to their sex lives.

Not only that, but our  culture is unnerved by sex. It loves the idea of sex, glorifying and exaggerating it, in every form of media available. The idea of it is great. But we hide it from each other and cringe when we hear our neighbours in the throws of it; we don’t talk about it in polite society and certainly not in detail. Our culture doesn’t want to get too close to what it really is; the actual biological process of it.  It spooks us.

Freud called the sexual energy the “libido”, which was actually a pejorative term (like “stupid lust”). This gives you some idea of how Freud wasn’t a totally miraculous improvement from the church’s disdain for sex.

But at least Freud acknowledged that repressed sexuality was unhealthy.  Wilhelm Reich, Freud’s student, went on to call the energy ‘orgone’. He wrote and spoke profusely about this energy, advocated for better orgasms and discussed heavily how people in modern culture repress it.  Ironically, he was treated much like the witches, dying in prison, while the FDA burned his books. This was as late as the 1950s.

The most famous of sex researchers, Masters and Johnson, also noted that people in our culture were much inhibited about sex. Many people experience sexual dysfunction, and even “healthy” couples have sex infrequently and typically have very brief intercourse (less than a few minutes).

It isn’t clear how cannabis would affect someone suffering from severe sexual hangups; however, it does seem like exploring the avenue of sex and cannabis; as both a, medical intervention and a business opportunity will pay off in the future.

You may have wondered: What happens when somebody with sexual anxieties uses cannabis?

Academic researchers like Dr. Leary and Stanislov Grof offer the ‘Internal Microscopes’ model of how psychedelics in general work, including cannabis. To use technical jargon,  cannabis acts as a “nonspecific psychological amplifier”, meaning that it ‘turns up’, or intensifies whatever is happening in the user’s psyche.

Colours are more vivid, curious thoughts are more profound, food is more delicious, music and art take on new dimensions of splendour; yet, mistrust becomes more paranoid and anxiety can become panic.  Cannabis turns the volume of psychological states to near-maximum levels, for some people, and minimizes it, in others.

According to a recent study, 70% of people report that sex is enhanced by cannabis, roughly 15% claim no difference and approximately 15% claim that cannabis actually ruins sex.

One conclusion that can be speculated is that cannabis is amplifying some people’s insecurities. Luckiest are those whose insecurities are mildest. For these people, the natural joy, intimacy and pleasure of sex can be amplified by cannabis, to reach a true ecstasy: an ecstasy so profound that, throughout the centuries, it could only be described as ‘spiritual’ or ‘rapturous’.

If you’re one of the unfortunate people that sex is ruined by cannabis; or even if you just want to learn how to reach higher ecstasies; there are methods. These methods involve experimenting with the variables ‘dose’, ‘mindset’ and ‘setting’.

Studies have also shown that practicing mindfulness techniques (practicing relaxation techniques, seeking therapy, etc.) can allow more space in your life for pleasure and an increase in sexual energies.

Lastly, please remember, lower doses of cannabis are better for tentative exploration and cannabis novices. Higher doses are meant for cannabis enthusiasts who are experienced.

Sexual anxieties are often difficult to overcome. Worse, the whole notion of ‘sacred sex’ doesn’t fit well into our culture, though things are changing. One’s anxieties will no doubt be louder on cannabis; however, for most, cannabis reduces anxiety while enhancing the natural joy, intimacy and the profound ecstasy of sex.

Since this sex-enhancing drug is now legal recreationally in Canada, it is no wonder people are curious to see if cannabis can really waken up their bedroom in a meaningful, sacred and exquisitely pleasurable way. 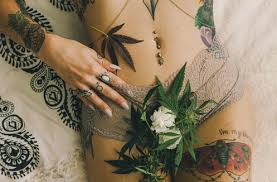 Have any questions about cannabis, sex enhancement or any of the strains discussed? Please leave a detailed message down below in the comments!